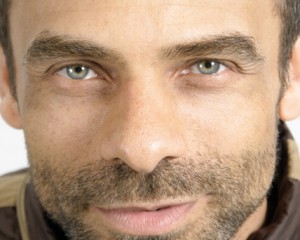 FABRICE RAMALINGOM started his career as a dancer-performer at the National Choreographic Center of Montpellier (France) in 1988, after studying at the National Center of Contemporary Dance in Angers. He worked there for Dominique Bagouet, an emblematic french choreographer, well-known for the intelligence of his writing style and the importance of his work. He also danced in the piece One Story as in Falling in 1992, created by the Trisha Brown, one of the most important american choreographer of post-modern dance.

In 1992, after the death of the choreographer Dominique Bagouet, the Bagouet Company came to an end.

He then created with others dancers, from the company that has disappeared, Les Carnets Bagouet, a group of reflections and transmissions from the deceased choreographer’s works.

Fabrice Ramalingom was one of its active members until 2003 and took part in the transmission of one of the most important pieces from Bagouet’s repertory: «so schnell» to the dancers at L’Opera de Paris (1998). He also managed the artistic direction of the remake of one the most complex plays of the Bagouet’s repertory, meublé sommairement which combines dance and the text from Emmanuel Bove’s novel: Aftalion Alexandre (2000).

In 2000, he started to choreograph on his own and signed «Implication», then in 2004 Touché and Mis Bolivias (creation for a cooperation’s project in Bolivia, with aid from the French Ambassy of Bolivia).

At the same time as his work as choreographer, he carries on working  as a performer : Flowing Along from Hervé Robbe (1994), CPAD from Yvonne Rainer reconstitued by the Quartuor Knust (1998), Past/Forward from the compagny The White Oak Project/Mikhail Barishnikov (2001) for the Paris Autumn festival (festival d’automne de Paris), Barakooda from Yves Noel Genod and Lugares Comunes (2006) from Benoit Lachambre, Quintet Cercle from  Boritz Charmatz.

In 2000 and 2001, he was advisor for the programming and artistic projects within the framework of the festival Jours de Danse in Nîmes.

In 2002 in Montpellier, he experimented the notion of the interdisciplinary project by creating  with a collective of 5 others artists ,the experimental place Changement de Propriétaire,which is an alternatives place of production and creation,where lessons are tought along with performances and experimental projects.

At the same time, he develops his activities as a teacher in different structures : at the Conservatoires Nationaux Supérieurs de Musique et de Danse  of Paris and Lyon, at the Centre National de Danse Contemporaine in Angers, at the Centres Choregraphiques Nationaux of Montpellier and of Tours, managed by Daniel Larrieu, and for the DCA Compagny of Phillipe DécouffLé.

In 2005, he was the advisor for Ex.e.r.c.e training course at the National Choreographic Center of Montpellier , managed by Mathilde Monnier.

From 2005 to 2008 ,he is one of the resident artist at the Theatre /Scène Nationale  of Sète and of the Bassin de Thau.

In 2006, he founded his own company : R.A.M.a and he opened the AIRE in Montpellier, a place dedicated to dance which he shares with Germana Civera.

In 2008 he created Fiction In Between, a duet with Saskia Hölbling, an Austrian choreographer and Vancouver versus Vancouver, a duet for two canadian performers.

In 2008 and 2009, Fabrice is an artist in residence in the area of Aude in the framework of the programming Rési-Danse Départementale directed by the Conseil Général and ADDMD11.

In 2010 for the 30th anniversary of the Festival Montpellier Danse, Fabrice will perform Pandora Box / Body at the Théâtre de l’Agora, Cité Internationale de la Danse.

In 2011, he created Brut, a franco-czech collaborative project and in 2012 My Pogo at Uzès Danse festival and Montpellier Danse festival.

Since his first experience as a performer at the Centre Chorégraphique National de Montpellier, FABRICE RAMALINGOM has been interested and engaged in the transmission and teaching in its various forms (vocational training, intervention in the universities, master classes, lectures danced, courses and workshops for amateur adults or children). He also works with professional companies such as PHILIPPE DECOUFFLÉ or as those of national choreographic centers : the Montpellier center fisrt directed by DOMNIQUE BAGOUET and then by MATHILDE MONNIER or the center of Tours headed by DANIEL LARRIEU.
In 2005 he was appointed artistic advisor for the training EX.E.R.CE at the Centre Chorégraphique National of Montpellier, led by MATHILDE MONNIER.

Fabrice continues to be a dancer for Benoît Lachambre, Boris Charmatz and Anne Collod.